Does cannabis (aka weed, marijuana, ganja, you get the idea),  increase exercise performance?   This was a question that was proposed to me by a magazine recently.  Hang on to your joint as we go down the nerd chute.

First off – there is not much hardcore research.  Very little in fact.  Cannabis is banned by WADA and most organizations.  Maybe that will change since weed is legal in countries like Canada now.  Either way, always check your organization for the rules.  My point with this article is not to condone nor demonized cannabis – just present the research. Even friendlier Canadians are coming

For performance enhancement, it highly depends on what type of exercise performance (eg. strength, hypertrophy, rate of force development, etc) and also how cannabis is administered (inhaled, smoked, edible, etc).   Add in that different strains contain hundreds of different compounds, thus making this a hard question to answer.  Here is some of what we know currently based on very incomplete research. 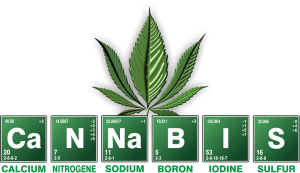 For THC (the main active component in weed that gets you stoooooned, broooooo), when it was taken via inhalation (smoked), there was an associated increase in airway conductance after inhalation that peaked at 15 minutes and lasted for up to 60 minutes (Tashkin, DP, et al.).  This research group also stated that airway dilation after marijuana administration increased and peaked at 3-hours while lasting for up to 6-hours post THC injection (Tashkin, DP, et al.).  In theory this could enhance endurance performance; however, a systematic review (Kennedy MC) in 2017 concluded that of the 15 studies conducted on the effects of THC, none showed any improvement in aerobic performance.

THC administration in a mouse model performed by Mendizabal-Zubiaga, J,  et al. showed a  decrease in mitochondrial oxidative capacity by 12-15%.

Results for weed and cardio? Neutral to possibly negative.   All stoners sob now.

What does the research say about smoking up before lifting dem weights?   In short, not much.

In one of the rare comparison studies, Lisano et al., in 2017 investigated self-reported marjuna users vs non users.  There were 12 males in each group.

Guess what they found?  A whole bunch of nothing.   No differences were seen for age, body mass, body mass index, body fat, forced expiratory volume in 1-second percentage, VO2 max, anaerobic power output, strength measures, testosterone or cortisol concentrations. Although anaerobic fatigue did show a trend  (p = 0.08, ES 0.75) for the weed smokers to experience a greater percent decrease in power output from the first to final stage during the 30-second Wingate assessment.  A Wingate is a hideous test of all out power over 30 seconds on a specially designed bike.  When I ran those in the lab, there would always be a couple of pukers.

The researchers concluded, “Results from this study do not support the initial hypothesis that chronic marijuana use impairs athletic performance and health status in physically active, male participants.”

It should be noted that the self-reported marijuana use and non-use was verified through mass-spectrometry analysis of venous, whole blood for THC and its primary metabolite that were found in 7 out of the 10 subjects in the marijuana  group (Lisano et al., in 2017).

In another human study, researchers lead by Ranganathan, M et al.  in 2009 investigated the effects of Δ-9-THC (the fancy nerd name for THC) at socially relevant doses found that it raised plasma cortisol levels in a dose-dependent manner.  Interestingly, frequent users showed blunted increases relative to healthy controls – most likely from a tolerance effect.  In theory, this may impair recovery from exercise, although performance / recovery was not measured.  This was also only THC and not any of the other compounds like CBD that can have dramatically different effects – which is a different rabbit hole.

Results for weed and exercise performance?  Neutral to maybe negative; although, the dose was quite low.  Stoners hold on to a glimore of green trichome hope.

If you are an athlete and play a contact sport there is an increased risk of head injury.  Cannabionids show promise here by potentially reducing the risks.  While the data is sparse and preliminary, it is quite promising for the use of cannabinoids in the reduction of risk from TBI.

Current research (Panikashvili et al., 2001) also indicated that endocannabinoids are involved in many different processes that include neuronal survival after ischemia or trauma.

Endogenous cannabinoids produce their effects by acting on two different receptors types throughout the body: type-1 cannabinoid receptor (CB1) and type-2 cannabinoid receptor (CB2).  Research in 2014 provided anatomical and biochemical evidence that functional CB1 receptors are located within brain mitochondria, suggesting that a direct link between the CB1 receptor and mitochondrial functions in the brain (Hebert-Chatelain et al., 2014).  When you take a whack to the head, your brain experiences a profound energy crisis and cannabinoids may be able to reduce this effect perhaps by effects on the mitochondria.

In short, the best data related to performance that we have now is the potential to reduce the risk of contact sports.  Hopefully, in the future we will have much more research on cannabis’ effects on all aspects of athletic performance.