Ever taken a wrong turn and then looked back to realize just how bad it was?

I did that the other day.

This past Friday I was running around all day and then packed up the SUV for a 3-week road trip.   Before I headed out, I did get in a 500M row and clocked in at 1:34, which tied my PR and 2 seconds from my goal.

Fitness lesson here- If you have a rower and have 5 total minutes or less, you can still get something done.  Trust me, after doing an all out 500M, you won’t want to do a ton more anyway.  If you have a set of kettlebells, take a heavy one and do snatches for 5 minutes ala the ole RKC Snatch test.  You can get something done most days.

Back to my story . . . I finally headed out at 3 PM CST to drive to Kadoka SD – which translated means “Hole In The Wall” – and aptly describes it.  My wonderful wifey Jodie was already there with her family.  The plan was to hang out there for post July 4 celebrations with family then drive to Bozeman and then on to Hood River OR for 2 weeks.

After almost 8 hours on the road, 2 gas stops, 2 protein bars, 1 banana, 2 energy drinks, several podcasts and tunes by Mr Bungle, I was only 10 miles away.  (Mr. Bungle is a side project from Mike Patton and Candiria – a progressive metal band from Brooklyn that bends metal, hardcore, hip hop, and jazz).  So I was only a short distance away. . . At this point, my GPS was going in and out, but I had a turn by turn saved so I would be good.

Or so I thought.

The GPS routed me a different way and it was darker than the inside of a South Dakota cow.  A few minutes later, my cell lost all signal.  Oh crap.  No worries, I still had the turn by turn which in theory works great until you realized that some of the gravel roads had signs without any writing on them.  I even got to double check.  Yep – the writing had faded away in the blazing sun over the years.

As I was in the process of turning around to go the 8 miles back to the freeway and start again, the GPS popped back on, and their house was only 1.7 miles away just on the other side of this hill.  Sweet!

I turned off on a new road, and it looked a bit muddy.  Hmmmm, this seems odd.  I stopped and got out to inspect the mud and it was just mud that washed across the road.   I took the turn and as I started going, it got muddier and muddier.

Oh crap, this is not good.

There was a hill, and I could not see anything beyond it. Now, the SUV was sliding back and forth in the 2 ruts as mud was coming up on windshield. There was no way I could turn around now, and if I stopped I would not get going again at all.  Before I took the road turned cow path, I did turn the traction control off and put it in 4-wheel lock just in case it got bad . . . although I did not expect it to turn into a mud bogging session. The mud eased up a bit and all looked better until I saw the next segment was completely covered in water.

I jammed down the gas a bit more and crossed my fingers. I made it exactly halfway before all 4 tires spun, and I was completely stuck.  I could not even go 1 inch forward or backwards – all 4 wheels just spun with zero traction. 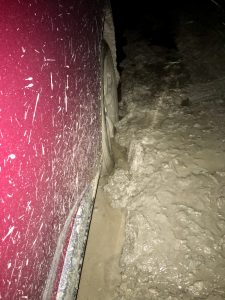 Just Great! I buried our Lexus RX 350 up to the floorboards in a giant mud bog in the middle of SD somewhere at midnight.  I am not even sure where I am. I looked at my cell phone….no signal. 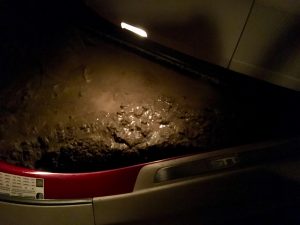 Oh man, that is not good.  I started to panic a bit as there were not even any houses anywhere nearby.  I stopped, took a few deep breathes and turned my cell off and on, hoping that it would pick up a signal as I powered it up with my arm stuck out the side of the sludgy window.

I called Jodie and luckily she picked up.  I talked to her Dad and explained where I was since I was pointed West and could see a red blinking light on a tower that went off and on once every 4 seconds. Turns out, I was about 1.5 miles from there house. And my father-in-law knew exactly where I was . . . on a road that the city had decided not to maintain yeeeeaaars ago.

I waited as he took their 4 x 4 truck out to pull me out.  Great idea in theory until the 4 x 4 truck gets pulled into the mud from the weight of trying to tow my vehicle. You know you are hosed when the 4×4 truck gets stuck. Now we have 2 vehicles buried, and it is 2am.  We opted to walk back to their house to sleep a few hours and got the tractor out there in the AM to pull both vehicles out. 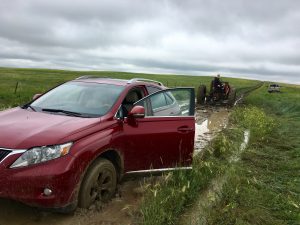 Back at their house that next day, I spent 2 hours with a power washer under the SUV working to get the clay out from everywhere as it had seeped into everything. One of the plastic bottom protective covers got mangled in the mud most likely when it bottomed out in reverse. Another hour later, I had that part off, and it seemed to drive ok.    We made it to Bozeman MT the next day, and to Hood River OR the following day.

Yes, there is a fitness lesson here, believe it or not.

Have you ever invested in a new program and did it hardcore 100%, only to find out you did not get the results you wanted?

Or even worse, your progress ground to a halt like an SUV stuck in SD mud?

Just like your fav nerd here on a muddy road in the middle of nowhere, in hindsight all the warning signs were there- mud, getting lost, never been on that road, etc.   Yet at the time, it seemed to be ok.  In my case I trusted the GPS too much – turns out it was a real road but due to budget cuts in the years ago the city decided not to maintain it. Even then, it would have normally been bumpy but drivable – except they had 3 days of monstrous rain which is extremely unlikely in July there in South Dakota.

With training (or even nutrition), just because the piece of paper says it is a good idea, don’t ignore all your own feedback.  By all means give it a fair shake.  Plleeease don’t do 1 day of a 8 week program and proclaim it’s crap, you crazy program hopper Hal. However . . . don’t do all 8 weeks of Smolov Jr to increase your back squat and end up with massive knee pain and a lower 1RM back squat.

Have a plan, do the plan, and keep in mind the COST of doing it in addition to the results.

And don’t always trust GPS in the middle of nowhere….
Dr Mike