While on a previous kiteboarding trip,  I took some downtime to dig into James Clear’s book Atomic Habits. 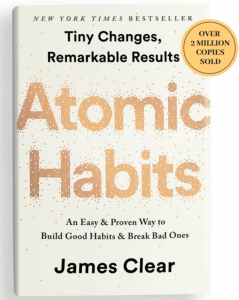 I don’t write a ton about habits, as I feel others do it much better, hence my purchase of his book.  I’m glad I did. One of the tips (and the best habit advice ever, in my opinion) James gave was this:

For example, you can miss once on not going to the gym, but don’t miss two times in a row.

Here is another example, say you “messed up” (your words not mine) your last meal.

Fine.  It is over and done.  It happens to all of us – although I prefer to enjoy the meal or two Irish Car Bombs and get back on track.

While on the trip, several of us went out to an Irish bar, as a bunch of the other kiteboarders were leaving.   And since it’s an Irish bar, you must order Guinness in some form.   This is a requirement. The particular night’s choice included Irish Car Bombs –a shot of Baileys and Irish Whiskey dropped into a half-pint of Guinness.   While I prefer to relax with a full pint of the tasty black stout, car bombs are acceptable on occasions.   Two carb bombs into it and time for fish and chips since that is traditional Irish food, and how can I say no?

As you can imagine, this was not on my meal plan – yes Kyle (my nutrition coach) – it is in my nutrition log.

Did I spend the rest of the night worried about it and get up at 4 am to run 4 miles in an attempt to burn off the extra alcohol Guinness-fueled omega 6 enriched calories?  Nope.   Jodie and I walked home and went to bed.

Get Right Back on Track

The next day, however, there are no excuses for not being on track to kick off the day.   I got up to do my walk, meditation, and run on the beach. One catch – it was cold and raining.

I washed down my Qualia with some collagen protein did my meditation on the couch in the living room.  Time to run, and I opted to just wear my swimsuit to go run along the beach in the rain.   The temperature was 63F – which felt cold until I reminded myself that this would be epically warm if I was still in Minn-a-snow-da.

I made my run doing an easy nasal breathing pace the entire time.  It was short, as I had not run in some time. I clocked in at only 0.8 miles at a snail’s pace of about a 10-minute mile.  There is no chance Nike will call me up in an attempt to break the 2-hour marathon except as their water boy; however that was not the goal.

The goal was to do an easy run.  I made the goal.

I followed the best habit advice ever. I did not miss twice.

PS- Never miss twice is the best habit advice you can put to use today.   Even after training for more than 2 decades, I still have days where it feels hard.    That’s ok, as it’s a life-long journey.   Get after it today and be better.