With all the uncertainty in the world now, I am doubling down on things that can serve multiple purposes, and Pop-Tarts, through a strategy I call Pop-tart periodization, are at the top of my list.

“Why Pop-Tarts, of all things?” you ask.

They can be used a food, rocket insulation, and even incendiary devices.

Ok, so one of those is not real (read on to find out which one).

Pop tarts are true “Jack of All Trades” items much like the fabled Swiss army knife.

Here are 4 more reasons for my love of Pop-Tarts.

If the apocalypse is coming, you can keep Pop-Tarts for years.  No refrigeration needed either.

Heck, the frosting on them never melts in the toaster or a hot car.   I have tested this, of course.  I’ve left them on the dashboard of my rental car years past in S. Padre TX when I was down there kiteboarding while the car was parked in the blazing sun.  You could never even tell.

I believe the frosting is a new ceramic that Elon is secretly testing out for his next rocket.  It has a dual role as being a last ditch calorie source too on the way to Mars.

One Pop-Tart has 35 grams of sugar, but that is crazy talk since everyone eats both as there are 2 in a package, you silly goose.

Two Pop-Tarts clock in at 70 grams of sugar with very little fat or protein.

If you take your own blood glucose every 20-30 minutes post consumption of dose pop tarts, you have your own OGTT (oral glucose tolerance test).

Yes. I do think this (or a test like it) is a good idea to do from time to time to see how metabolically flexible your metabolism is in response to a piss-ton of sugar. If you feel like you want to pass out under your breakfast nook after 2 Pop-Tarts or your blood glucose spikes to 150 mg/dL, your anaerobic metabolism needs some work.   I have a full article on this aspect at Pop-Tart – Proof.

While I stated that the frosting does not melt in the toaster above, that is true – but only if your toaster is working normally.

When you go around the safety mechanisms and you trap an innocent-looking Pop-Tart in the toaster for several minutes, it WILL catch fire and shoot flames out of said toaster 1-2 feet high.

This was first demonstrated in 1994 by  Texas A&M University Corpus Christi professor Patrick Michaud . performed an experiment showing that when left in the toaster too long, strawberry Pop-Tarts could produce flames over a foot high. (1)

Yes, pop tarts can morph into a blowtorch.

No joke!  Check out the video below

Each box has a warning on it. 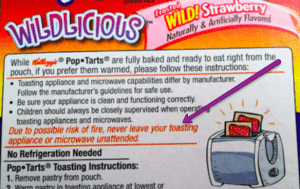 It goes without saying, do not do this at home.

**Mental note to self – ask wifey about much she likes our current toaster?

Pop tarts were first introduced into the market in 1964.   For about five and half decades, they have stood the test of time.  Kellogg’s sells more Pop-Tarts now than ever before.

“The company now sells about 2 billion Pop-Tarts each year in the United States, which is double the sales of the early 1990s.” (2 & 3)

Virtually every store and gas station has pop tarts. It is easy to up your stash at any point.

I view Pop-tarts as part of distress nutrition that I cover in the Flex Diet Cert.

Distress is stress that can take your body longer to recover from.   For many, Pop-Tarts with their 70 grams of sugar are a distress to their metabolism.  Over time, with training, you want to take as many distress stressors and morph them into eustress – stress that your body takes less time to recover from,  hence Pop-tart periodization.

Let’s say you have 2 S’Mores Pop-Tarts for breakfast tomorrow as you did not heed my advice to get the strawberry frosted ones.   I will still forgive you.

Your baseline blood glucose is a nice 85 ng / dL; however, 60 minutes after 2 Pop-Tarts you are at 145 ng / dL.  Eeeeek,  that is some hard data that your body is having a hard time dealing with pop tarts.

Now, you are a loyal reader, so you already have the Flex Diet Cert.  You put all that info into your new training and nutrition plan that you violently execute at 90% compliance for the next 8 weeks.  This time, after 2 Pop-Tarts, your blood glucose is 122 ng / dL.  Much better.  Your glucose metabolism is moving in a better direction.

You are taking a distress and moving it towards a eustress.  Your body has better function overall and can now buffer that stressor.

There you have 4 fun facts about Pop-Tarts and how to use Pop-tart periodization to test your body’s metabolic flexibility to carbohydrates in an easy and safe manner….

…as long as you don’t leave them in the toaster too long.