I am back in Minnesota for a couple days as we head out to the Ancestral Health Society conference this coming Wed night since I am presenting there Thurs AM on the use of CBD.  Hit me up if you are going to be there.

This past few days I was in Maine doing a 2 day course from Tom Myers about hands on work and trauma.   It was super fascinating, and I learned a ton – summary coming later this week; but the travel to get there and back was a nightmare.   This totally threw my nutrition and training for a loop too. So what could I do to stay on track?

Since the training was in Walpole Maine, I was to fly out to DC, then Portland Maine, then drive 1.5 hours from there.   Long story short, my flight got diverted to Chicago after circling there for 2+ hours we had to land as we were short on fuel.

Add in an hour of sitting on the plane since the staff on this flight which I won’t name (cough..United….cough) were clueless.  I finally called customer service and asked to be rebooked on a flight that night, which they did . . . and then that one was delayed 3 hours.

My next boondoggle was the rental car place which closed at 12:15 am, and I landed at midnight.   I sprinted there, got my car, and made the drive- hat tip to 100 mg of anhydrous caffeine and music by the band Death for the trip.   Crashed into bed at 2:20 am for a couple hours sleep. 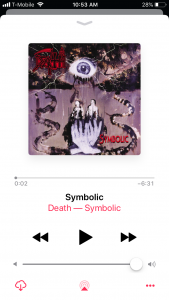 I felt pretty good actually during day 1, but I was toasted by the time class was over.  Since I did not have much food with me as all the stores were closed when I came in, I opted to do a very low calorie day.   Plus, I was not training that night either.

Day 2 arrived, and I was up early to do my easy AM run, meditation and even took a cold plunge off Tom’s dock which was right next to where I was staying.   Awesome! I got in my AM routine plus some cold exposure. 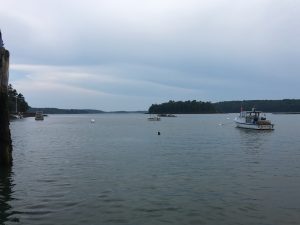 Take Away #1: AM Routine

Stay with your routine as best you can, even under different circumstances.   I like to have a set AM routine as I can control the AM more than any other time of day.  This is the same for my 1-1 M3 online clients too.

Class went great and I opted again to do a low calorie day with just 2 meals of protein.   For dinner since I was hungry and it was my last night there, I drove into town and got a seafood platter with scallops, salmon, shrimp and a lobster cake and a dark beer to boot.   I was in Maine and I was not going to pass up seafood. 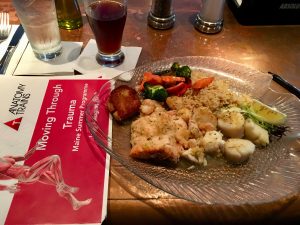 If you are not training as hard, you can be more aggressive with cutting back calories on those days.   When you do eat, you will be hungrier and focus on upping your protein at that meal.

The next day I was up early and did some meditation, walk, movement, cold water plunge, and some Wim Hof breathing.   I took the day to drive back to Portland and trained at the World Gym there in town – which went pretty good. 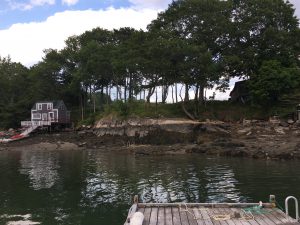 If you are going to be in the middle of East Bumbletown for an extended time, look at the bigger towns / cities where you arrive or leave as locations to get to a gym.  Do this ahead of time and plan your training around it.  In my case, I knew I would be at a gym then so taking 2 days off with just some light running would be fine. 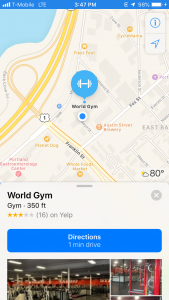 Along the way I stopped to pick up a few protein supplement just in case my travel went wonky again….

…which of course it did!

When I got the airport as I was waiting in line, my flight was delayed by 2 hours which meant I was going to miss my connection.  Then my flight out was cancelled.

There were no more flight out from Portland that night or even the next day.   The only option was to stay there overnight, get up earl to get on a bus to Boston / Logan airport for a flight to Chicago and then back up.   Long story short, the flight from Chicago was delayed and we had to get another plane; but  I finally made it home. 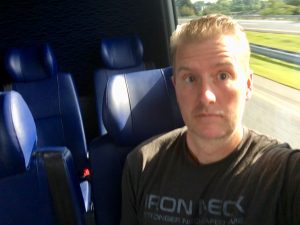 Take Away #4: Plan for the poo to hit the fan

Something is going to happen.  I was happy I stocked up a bit on protein and hit up the Whole Foods for some food including a large salad on my way to the airport that night.  I turned out that was my entire supper.  I had debated since I was going to be in Chicago within a few hours, but opted to grab something just in case.  Turns out it was very helpful.  Plus airports are not known as locations for the highest quality food.

I was finally back home around 6 pm Sat. My wife and I had Chipotle, and I got to sleep 11 hours that night.  It was epic!

Bonus Take Away:  Get back on track ASAP

Travel and just life in general will toss your off the best laid plans.  It is going to happen.

If you fall off the truck, get back on.

I have a saying that I stole from Charles Staley.   If you get a flat, get out, and fix it.  You don’t puncture the other 3 tires and yell to the heavens “I am soooooo hosed now!”

This is not a place for all or nothing thinking.

I also have a rule that if I am back home before 5 pm, I will do some training that day still.  Many times I’ve gotten home, dropped off my backpack and then changed clothes first thing to go do some rowing.

Yes, I am spoiled that I have a garage gym and a rower.  But even if you don’t have those things, there is something you can do at home like body-weight exercise, tossing around a few KBs or doing a short run.  The key is to get back in the groove ASAP.  It is very easy for 1 days to turn into 3 in no time.

Travel is just one example of a potential stressor that can pop up and send your routine into an upheaval. It could be a sick kid or pet or a myriad of other things.

Life is going to happen to you.

How you deal with it and keep moving forward it what matters.

…and don’t puncture the other tires in the process.