Plant proteins have become more popular recently (ala Game Changers documentary) in part due to environmental concerns or ethical concerns (1, 2).  Are plant proteins really better for mother nature?  There is some data to support that claim, but it is far from conclusive.

Pimentel et al. in 2003 (3) analyzed the efficiency of land and energy resources devoted to an average meat-based diet compared with a lactoovovegetarian (plant-based) diet. They founds that both diets contained the same number of calories at 3,533 kcal per person, which is a great way to keep an “even playing field” for the comparison.

In the USA, Europe and Australia, meat and dairy provide about 80% of the daily protein intake compared to Africa where as little as 7 g of meat and 4 g of milk are consumed per capita (4). This is a crazy low amount.

Again, this is far from a solid case that plant proteins are superior for the environment, and the analysis gets super messy very fast.  However, if you opt to increase your use of plant protein, the next question is if you can get the same physiological response (aka gainZ bro)?

A study by Yang et al. (5) compared the effects of whey and soy protein in older men (age 71 +/- 5 years). The subjects completed a single-leg extension exercise before taking either no protein or 20 grams of soy protein.  The researchers sampled the men’s muscle tissue via biopsy to compare the results to the non-exercising leg.

Yep, they jammed a large needle into their leg to pull out a chunk of muscle.   They found that consuming soy protein was better than nothing (shocker! I know), but it did not match to the response of whey protein from previous studies (6).

They found that a huge 60-gram dose of wheat protein was needed to see the same muscle protein synthetic (aka MPS also know as gainZ) response as the lower dose of 35 grams of the dairy based proteins. (7).

If you are some oddball trying to get all your protein from a wheat protein, back up the feedbag to the tune of twice the amount of protein you need to consume in one sitting to see the same effect for your muscles to recover.

How about rice protein, which is a popular plant protein?  Can it help with your muscle gainZ?

In a chronic study from Joy et al (8), subjects were given either 48 grams of rice protein as a supplement or 48 grams of whey protein isolate after exercise.  They did not see any difference between groups over 8 weeks at that dose (8).  This study provides data that while plant proteins tend to be inferior to dairy based proteins on a gram-for-gram basis, that difference in MPS can be equalized at a higher intake dose.

In short, for rice protein, when you use a higher amount you can see a similar effect.

In summary, depending on the source of plant proteins used, you can still see a good effect on your gainZ if you got within a 40-50 gram dose.

The Driven Nutrition vegan plant based protein is a great option if you are not including animal products in your diet.  It also has a complete amino acid profile providing enough essential amino acids and especially leucine at a dose of 2 scoops with 40 grams of protein. 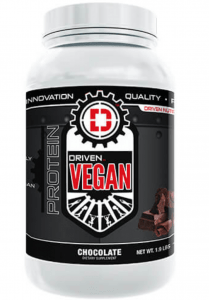 Fuel up, my friends, for the mad gainZ, even if you are avoiding animal products.